Luke Marston (Ts’uts’umutl), a member of the Stz’uminus (Chemainus) First Nation, was born in 1976 on Vancouver Island to carvers Jane and David Marston. He learned Salish history and traditional stories from the late Coast Salish artist Simon Charlie, and honed his talents in form, design, carving, and detailed finishing from Haida/Nisga’a artist Wayne Young. Luke then worked for five years at Thunderbird Park at the Royal British Columbia Museum in Victoria, alongside Jonathan Henderson, Sean Whannock, Sean Karpes and his brother, John Marston. 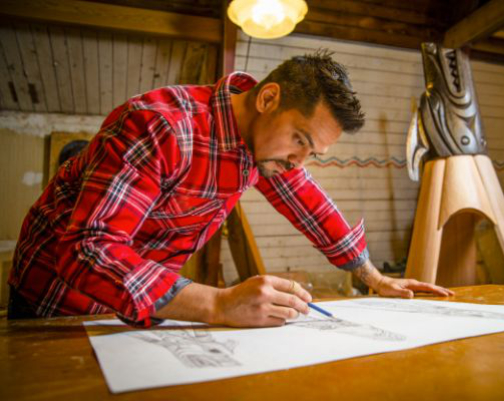 Relentlessly working to broaden his horizons, Luke has explored stone carving, painting, jewelry and printmaking; however the majority of Luke’s work is created in wood. Marston’s style is characterized as bold and dramatic, combining a deep knowledge of Coast Salish heritage with his personal contemporary aesthetic. Luke aims to preserve his culture by sharing his art with the public.

His fine artworks grace many private collections and have been exhibited nationally and internationally — including exhibitions in Canada, the United States, Japan, and Portugal. He has had major commissions from the Canadian Government, The Truth and Reconciliation Commission, the Lieutenant Governor of British Columbia, the Vancouver Airport, and much more.

I am inspired by the legacy of my ancestors. My work is a reflection of the respect I feel for the master carvers of long ago. I believe that we have to find a balance between traditional and contemporary art, and at the same time evolve and grow as Coast Salish people.

In 2008, Luke traveled to Japan with his brother John to participate in a cultural exchange called Ome Art Jam. The Marston brothers participated in a series of demonstrations, collaborations and exhibitions, and performances of mask dancing. Luke appreciated the precise craftsmanship and attention to the details of the Japanese culture, both characteristics of his carving practice.

In 2010, Luke was commissioned by the Canadian Department of Indian Affairs to create the Medicine Box, representing and honoring the survivors of the Canadian residential school system. The Medicine Box, a centerpiece of the Truth and Reconciliation Commission, traveled across Canada to all the hearings of the Commission as a symbol of healing for First Nation peoples across the country. It now resides at the National Research Centre for Truth and Reconciliation at the University of Manitoba.

Former Lieutenant Governor of British Columbia Steven L. Point, judge of the Provincial Court and Elder Xwĕ lī qwĕl tĕl from the Stó:lö Nation, commissioned the Healing Pole from Luke. Designed to bridge the gap between nations and bring people together, this carved and painted red cedar pole stands fourteen-foot tall in the foyer of Government House, in Victoria BC.

Luke’s masterpiece, Shore to Shore, was unveiled in April 2015 at Brockton Point, in the famous Stanley Park of Vancouver, BC. Three years in the making, this 16.5-foot bronze-cast cedar sculpture is a tribute to his ancestors: Joe Silvey, a fisherman from Pico Island of the Azores off the coast of Portugal, Silvey’s second wife and Luke’s Coast Salish great-great-great-mother Kwatleematt, as well as Khaltinaht, Joe’s first wife and sister of Kwatleematt. The Silvey family now counts 1,200 members. Written by journalist Suzanne Fournier and published by Harbour Publishing, the book Shore to Shore: The Art of Ts’uts’umutl Luke Marston chronicles Luke’s career as a Coast Salish carver and the creation of his largest sculptural work.

For any aqcuisition, partnership, or business inquiries, please contact Luke by clicking the button below.